Twila Brase, CEO of Citizens Council for Health Freedom, rejoins the program to discuss the very serious data and power grab over your personal health data. They claim they want this data to do good for society, but there are serious dangers lurking behind this $30 billion electronic initiative to control your personal data from “womb to tomb”. They want your genetic code, your family history, and even knowledge of conversations you have with your doctor! What do they want ALL this data for? Listeners will be shocked to learn that their health data is already not protected by law.  You can make a difference today by contacting members of congress and senate letting them know that you do NOT want a Universal Federal Health ID. Also, contact Senator Rand Paul and show your support on his initiative to block any legislation supporting a Universal Federal Health ID. This is SERIOUS, call them today….

Twila Brase is president and co-founder of the Citizens’ Council for Health Freedom (CCHF), a patient-centered national organization based in St. Paul, Minnesota. She is also author of the groundbreaking book, Big Brother in the Exam Room: The Dangerous Truth About Electronic Health Records (Beaver’s Pond Press, July 11, 2018).

In August 2009, Modern Healthcare named her #75 on their “100 Most Powerful People in Healthcare” list. The Council initiated a 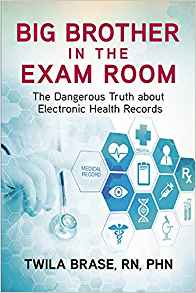 billboard campaign that went viral in March 2014 (“Obamacare Games: Where the odds are never in your favor – Refusetoenroll.org”). CCHF also helped 34 states refuse Obamacare exchanges, stopped government-issued treatment directives, added consent requirements for access to patient data, drawn national awareness to state storage and use of newborn DNA without consent, which led to lawsuits in IN, MN and TX and led to a federal parent consent law for research using newborn DNA. In June 2016, CCHF launched The Wedge of Health Freedom to build a free-trade zone of direct-pay practices….

Did you know that whenever you whisper, “I’m sorry…” to someone quietly in your mind, someone over here sheds a tear and healing begins?

Did you know that whenever you whisper, “Thank you…” to someone quietly in your mind, someone over here sheds a tear and presents are sent?

And did you know that whenever you whisper, “I love you…” to someone quietly in your mind, someone over here sheds a tear, healing begins, presents are sent, and 10,000 bells are rung?

Actually, you have your own marching band that follows you everywhere…

I love you, — The Universe