Even cambodia can’t shake off this swarm of blood-sucking vampire  termites that infests the entire planet. This despite their years under the US backed regime of Pol Pot and the khmer rouge.   If any nation would be expected to be on guard against US meddling, it would be cambodia.

The infiltration of the satanic cults is most evident in the “3rd world” because it’s still a work in progress. In the western “democracies” it happened years ago, so it’s largely invisible. But when you can see the money flows, the centralized orchestration becomes apparent.

The Guardian in its article, “Cambodia’s strongman PM digs in with arrest of opposition leader,” would report:

The Cambodian opposition leader, Kem Sokha, has been arrested accused of treason, according to the government, in the latest of a flurry of legal cases lodged against critics and rivals of the strongman prime minister, Hun Sen.

The surprise arrest raises the stakes as Hun Sen’s political opponents, NGOs and the critical press are smothered by court cases and threats ahead of a crunch general election in 2018.

The Guardian would also note:

On Saturday night a pro-government website – Fresh News – alleged that Kem Sokha had discussed overthrowing Hun Sen with support from the United States.

The Guardian would conclude by stating:

Last week the US expressed “deep concern” over the state of Cambodia’s democracy after the government there ordered out an American NGO and pursued a crackdown on independent media.

Among the media in the firing line is the well-respected Cambodia Daily, which often criticises the government.

It faces closure on Monday if it fails to pay a US$6.3m tax bill, a threat it says is a political move to muzzle its critical reporting.

The Guardian fails to mention that the Cambodia Daily is owned by an American and that the “American NGO” ordered out of Cambodia was the National Democratic Institute (NDI), an organisation notorious for its role in subverting and overthrowing the governments of sovereign nations.

The Guardian and other American and European media platforms have collectively failed to dive into Kem Sokha’s background. Had they, charges of treason would seem less far fetched and contrived as they have been presented to the public.

Kem Sokha, Made in America

On its webpage titled, “Donors and Partners,” it lists the Australian and British embassies, the US State Department, the European Union, USAID, Freedom House and Open Society among many other foreign government-funded and corporate-funded foundations as its financial sponsors.

Under “Affiliations and Cooperation,” it lists Human Rights Watch, Amnesty International, Article 19 along with many other primarily US and European-based, organised and funded fronts that leverage human rights advocacy in pursuit of politically-motivated agendas. 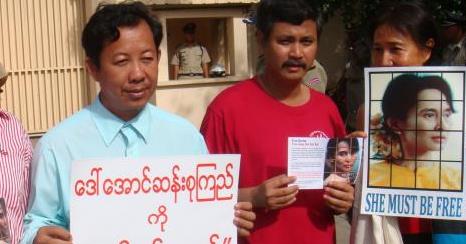 Ironically, on this same page, activists are shown demanding the release of then-imprisoned Myanmar politician Aung San Suu Kyi who has recently run afoul with advocacy groups due to her role in ongoing genocide against that nation’s Rohingya minority.

CCHR is clearly not “independent” if it is in fact dependent entirely on US and European cash to operate. Nor is it “non-aligned” if it is clearly aligned unequivocally with US and European-led interference across Southeast Asia through fronts they collectively fund to undermine one government in favour of another.

Since taking to politics, Kem Sokha and his opposition party have regularly met with the sponsors of CCHR, including the US Secretary of State John Kerry in 2016….

This sort of support provided by the United States in Cambodia has in other nations resulted in the usurpation of governments and even war. Examples include Ukraine, Libya, Syria and Yemen.

The nation of Myanmar is also currently led by a political party propelled into power by extensive US and European support provided over a period of decades.

In neighbouring Thailand, US support for opposition groups has resulted in a protracted political conflict, recently culminating in the fleeing abroad of ousted ex-prime minister Yingluck Shinawatra. Continued US support for Shinawatra and opposition networks will likely lead to further conflict in the near future. …