Phillipe Reines, senior political advisor to Hillary Clinton, tweeted this to Genral Flynn and his son Mike Flynn Jr. last night, after it was announced that his Father had resigned from the national security position.

What goes around COMETS around.

And given your pizza obsession…

If you’re unfamiliar with Flynn Jr., he was one of the more prominent people close to the Trump administration who questioned the peculiarities of the Pizzagate story.

In response to Phillipe’s tweet, Hillary felt it necessary to pile on, lecturing the Flynns about the hazards of perpetuating ‘fake news.’ 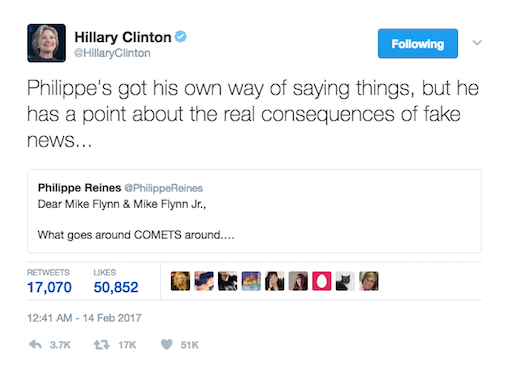 General Flynn resigned because he might’ve spoken to the Russians about sanctions at a time when he wasn’t authorized to do so, not because of some story about pedophilia taking place in the basement of a Washington DC pizza parlor. So why in the actual fuck would Hillary even reference this in a tweet?

It sounds to me, she is saying ‘fuck with Podesta and Comet Ping Pong and you lose your job.’

In our faces once again.  Clearly these people believe themselves to be immune from justice.