Quick: what’s the first thing you remember about the climate conference in Paris last December?

The weather astrologers’ absurd resolution to control the amount of temperature rise the world will experience over the next century?

Politicians grandstanding on the freshly-dead victims of their latest false flag to proclaim that their global warming nonsense was a “powerful rebuke” to their proxy terror army in Syria?

The predictable (but no less retch-inducing) hypocrisy of the jetset glitterati descending on Paris in their private jets and limousine fleets to dine on banquet lunches from Micheline-starred chefs before lecturing humanity on how we’ll all have to tighten our belts for the new climate austerity?

Of course that’s what you remember. Because that’s what you’re expected to remember. As long as you never peek under the hood, never lift the lid to check what’s inside the COP21 documents, they’re perfectly happy for the usual drivel about saving the planet to be printed in the mainstream press. They’re perfectly happy for the progressive press to print the usual nonsense lamenting the fact that there isn’t a strong enough global government to save us from the weather demons. They’re even happy for the dissenters to debunk the flawed science and point out the hypocrisies and lambaste the silly political statements because all of these things miss the heart of the issue.

The heart of the issue (for those who need it elaborated) is this: the future of $90 trillion of energy infrastructure investments and the $1 trillion green bond market and the multi-trillion dollar carbon trading market and the $391 billion (and growing) climate finance industry hangs in the balance.

Of course it does. What else explains the convergence of interest in the organizations, structures and mechanisms for global governance that the magical global thermostat narrative affords?

It’s why Enron and Goldman Sachs pioneered the emissions trading swindles (that–surprise, surprise!–are a complete and total fraud from top to bottom).

It’s why General Electric, DuPont, Johnson & Johnson, Pepsi, Siemens, AIG and a host of other Fortune 500/CFR companies joined BP, ConocoPhillips, GM and a host of other oiligarch companies as founding members of the US Climate Action Partnership whose “Blueprint for Legislative Action” became the backbone of the Wall Street-backed Waxman-Markey bill of 2009.

It’s why the Rockefellers and Rothschilds are at the forefront of the climate hysteria. 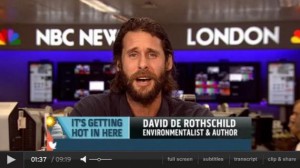 It’s why over 400 global institutional investors worth over $25 trillion have decided to cash in on the bonanza with their “Investment Platform for Climate Actions.”

Heck, it’s why EDF, Engie, Air France, Renault, BNP Paribas and a host of other oiligarch companies footed 20% of the bill for the Paris conference itself (and why the French government bent over backwards to point out their “green” credentials).

Take just one structural element of the climate swindle: the Green Climate Fund. Never heard of it? Hardly surprising. It’s just the facility through which the UN is expected to be clearing $100 billion in climate funding per year by the end of the decade. That’s right: $100 billion per year. Every year.

The Fund was established at the 2010 edition of the UN Climate Conference (COP16) in Mexico in order “to support concrete mitigation actions by developing countries that are implemented in a transparent way,” which is UN Newspeak for “create a bottomless trough of pork for corrupt kleptocrats, bureaucrats, kakistocrats and tyrants to siphon off before funneling some loose change into some makework projects.” And it brags that it represents “a new and equitable form of global governance to respond to the global challenge of climate change” which you hardly need the globalist decoder to figure out. The Fund is headquartered in the Songdo Business District of Incheon, South Korea, because the Korean Secretary-General of the UN and the Korean President of the World Bank probably just threw darts at a map (since, as we all know, blatant political nepotism never happens at those institutions).

Even the Fund’s biggest supporters are criticizing the “transparent way” it is handling its first disbursement. The Fund claims it consulted indigenous communities before approving $6.2 million for a Peruvian wetlands resilience programme, but there is no verification that this ever took place. Worse, details of the projects it has decided to fund so far have not been publicly released, only proposal documents (and in two cases, only a summary).

But for those who still believe this money is being handled by angels with nothing but the best interests of humanity in mind, note this passage from the Nature article on the Fund’s shadiness:

“For some, another contentious issue is that the GCF is flowing its money mainly through international organizations, such as multilateral or private banks such as the World Bank and Deutsche Bank — rather than sending it directly to institutions in developing countries where the projects are taking place.”

For some? You mean, for people with their head screwed on straight?

Oh, and the kicker? The Fund’s Executive Director just happens to be an ex-Citibank investment banker. Who woulda thunk it? 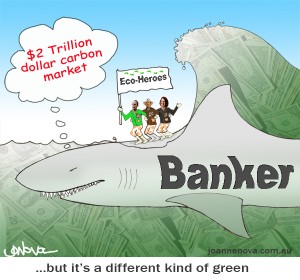 Yes, the global climate swindle is well under way, brought to you by the same trustworthy folks in the banking industry and in the Fortune 500 / CFR / globalist jetset who have been steering us into the happy economic, political and environmental conditions that we enjoy today…

If there’s any bright spot in all of this it’s that so far the Fund has only managed to raise just over $10 billion in pledges from the developed countries. And even that is an inflated number which includes the $3 billion which Obama made a big show of pledging in 2014 but so far hasn’t actually delivered. It’s a long way to go to get to that $100 billion/year mark they’re hoping to reach by 2020.

Don’t feel too sorry for the globalists, though. Their game is a war of attrition, and as long as people continue to buy into the narrative that all of this money is going to help the poor and downtrodden (by way of the UN and the World Bank and their corporate crony Wall Street financial institutions) then it’s only a matter of time before this thin edge of climate cronyism turns into the full wedge of global kleptocracy.

One thought on “The 100 Trillion Dollar Bankster Climate Swindle”