In March, the federal government removed the latest vaccine injury court statistics—more than a year’s worth of data—from one of its publicly reported charts. It was an abrupt departure from the normal practice of updating the figures monthly.

Wiping the latest data means the “adjudication” chart on a government website no longer reflects the recent, sharp rise in court victories for plaintiffs who claimed their children were seriously injured or killed by one or more vaccines.

Since January of 2014, twice as many victims have won court decisions than the previous eight years combined. In these court decisions, a judge ruled the evidence showed vaccines “more likely than not” caused the plaintiff’s injuries.

Also on the rise is the number of vaccine injury cases the government has “conceded”: up 55% in a little over one year.

As a result of the recent website changes, neither of these trends is reflected on the current “adjudication” chart. …

A ten-day US Army urban military training exercise has begun in Flint, Michigan with explosions rocking neighborhoods and scaring residents who had no idea what was actually happening.

With less than three hours between a city press release and the beginning of the exercise, residents were left in the dark about the urban military training until the last possible moment. Most had no idea what was happening as their homes shook from the force of the simulated explosions.

“It was like a big huge explosion, it shook my whole house, it shook the ground.”

It has nothing to do with the planned implosion of the economy you see.   The interests that have devastated the united states from within have been arrested and charged with treason, fraud and murder.   The trillions of dollars in looted assets, cash and gold have been restored to the treasury.   The thousands of soldiers whose lives have been wrecked in the fraudulent war on terror have new homes paid for by zero percent century loans provided by the newly federalized federal reserve.   Likewise for the millions of families put on the street in the mortgage derivative scam.  Russia and China are relieved they won’t have to fight WWIII.

By a vote of 67-32 the Senate today passed the USA FREEDOM Act, just days after the expiration of key elements of the USA PATRIOT Act. The FREEDOM Act is billed as a reform of the unconstitutional and recently-ruled illegal bulk collection of Americans’ telecommunications, but in fact it is a whole new level of attack on civil liberties.

Here are just a couple of ways the FREEDOM Act is worse than the PATRIOT Act:

2) The FREEDOM Act turns private telecommunications companies into agents of state security. They will be required to store our personal information and hand it over to state security organs upon demand. How do we know this development is a step in the wrong direction? It is reportedly the brainchild of Gen. Keith B. Alexander, the NSA director at the time! According to press reports, this was but a public relations move to deflect criticism of the bulk collection program. Alexander “saw the move as a way for Obama to respond to public criticism without losing programs the NSA deemed more essential,” reports Homeland Security News.

3) The FREEDOM Act turns private telecommunications companies into depositories of “pre-crime” data for future use of state security agencies. It is a classic authoritarian move for the state to co-opt and subsume the private sector. Once the FREEDOM Act is signed, Americans’ telecommunications information will be retained by the telecommunications companies for the use of state security agencies in potential future investigations. In other words, an individual under no suspicion of any crime and thus deserving full Fourth and Fifth Amendment protection will nevertheless find himself providing evidence against his future self should that person ever fall under suspicion. That is not jurisprudence in a free society.

4) The FREEDOM Act provides liability protection for the telecommunications firms who steal and store our private telecommunications information. In other words, there is not a thing you can do about the theft as long as the thief is a “private” agent of the state.

It is very telling that the same Congressional leaders who have supported the PATRIOT Act for all these years are now propagandizing Americans in favor of the FREEDOM Act. …

In the latest escalation of its campaign against the Trans-Pacific Partnership (TPP), the nation’s largest labor federation is calling on the Obama administration to declassify the full text of the proposed trade agreement. And on a rainy Tuesday morning in Washington, the AFL-CIO and its allies engaged in some old-fashioned political theater to make their point.

As it stands, access to the deal is limited to negotiators and, upon special request, members of Congress, all of whom are legally barred from disclosing the details. Those strict rules remain in place even as the White House lobbies the House of Representatives on so-called fast-track legislation. The bill would prevent lawmakers from amending the version of the trade deal finalized by negotiators and is widely seen as a prerequisite to passage of the treaty, which would link the United States with 11 other Pacific Rim countries, including Japan, Australia and Singapore. (The Senate passed fast-track last month, and an extremely tight House vote is expected soon.)

Labor unions are among the fiercest critics of the proposed treaty, which they say will lead to domestic job loss, undermine public interest laws and further empower multinational corporations. Some of them are on advisory committees and have therefore seen proposals from U.S. negotiators, even if they cannot disclose details publicly. “We would be in violation of the law and would face penalties,” AFL-CIO deputy chief of staff Thea Lee said. “We would also certainly lose our security clearance, hampering our ability to engage in future trade discussions.”

President Barack Obama has pushed back against critics who cite transparency concerns — at one point, accusing Sen. Elizabeth Warren, D-Mass., of politically motivated fearmongering. Recently, the president said “there’s nothing secret about” the deal and anyone “can walk over today and read the text of the agreement.” On Tuesday, opponents decided to give it a try.

Joined by environmentalists, faith leaders and two members of Congress — Reps. Rosa DeLauro, D-Conn., and Lloyd Doggett, D-Texas — dozens of unionists and sympathizers rallied outside the AFL-CIO’s headquarters in downtown Washington, calling on the administration to release the agreement publicly. Then, amid of chants of “show us the jobs, show us the text,” the crowd marched several blocks to the Office of the United States Trade Representative (USTR), where a smaller group knocked on the agency’s closed doors and demanded to see a copy of the Pacific agreement.

No one answered because no one was there.   Only zombies doing their jobs.   And zombies will continue to do their jobs because they have families to feed, just like the protesters.   The problem is systemic and embedded in the nature of the monetary system.   There is no more important issue than the nationalization of the central bank and government control of the issuance of money as specified by the constitution.    War, poverty, pollution, corruption … it all revolves around the pathological manipulations of the money power, and the public face of that mafia is the federal reserve.

In recent days, you’ve probably heard the barrage of lies Wall Street’s Chuck Schumer has manufactured in his vicious and bitter campaign against Alan Grayson’s run for the open Florida Senate seat. Grayson is basically ignoring Schumer and the DSCC and going about his work on behalf of his Florida constituents. He has, for example, been leading the battle in the House to stop TPP Fast Track Authority. And today, he sent a pretty bold letter to his supporters on behalf of that battle:

Under the First Amendment, you have the right to petition your government to redress your grievances.

Now would be a good time to do that. Today.

According to public reports, the 18 Democratic Members of Congress listed below are leaning in favor of voting for “Fast Track,” legislation that would prevent Congress from debating or amending whatever the Executive Branch calls a “trade bill.” As a public service, we provide you their office phone numbers.

Call one; call them all. Call as many as you want. Exercise your constitutional right to redress your grievances. Make them listen. (By the way, the system is rigged so that you can’t send them an e-mail unless you are a constituent. So you have to call.)

Here are some things that you might explain to them about this bad bill:

(2) Fast Track applies to whatever the Executive Branch calls a trade agreement, even if it has nothing to do with trade.

(3) Fast Track unconstitutionally restricts Congress from holding hearings, conducting investigations, debating a bill and offering amendments– basically, its job. In fact, it could restrict each House Member to only 83 seconds of debate.

(4) No other bills get this special treatment– not bills on taxes, or Social Security, or defense, or transportation, or healthcare. Nothing.

(5) Fast Track applies to trade bills that the Executive Branch hasn’t even released to the public.

(6) None of the “standards” that Fast Track sets for trade agreements is enforceable– not one single standard.

Alternatively, you can just say that you’re tired of Middle Class America getting hosed. But whatever else you say, make sure you say this:

NO on Fast Track!

Blue America has a list of incumbents who are fighting for progressives values along with Grayson. Wall Street would like to defeat every one of them and several are already under attack from Wall Street Republicans and/or from Wall Street Democrats. Take a look at the list and please consider encouraging their fight against Fast Track with a contribution to their reelection campaigns. 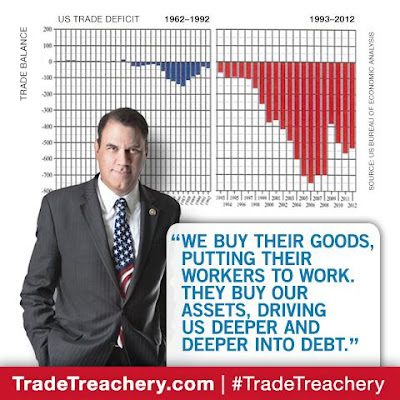