In his book, Psychological Warfare and the New World Order, Servando Gonzalez describes, “a long, protracted war against the American people. It is not a conventional war waged with tanks, battleships and planes in conventional battlefields—at least not yet.”

Gonzalez continues, “It is a secret, insidious type of war whose main battleground is the people’s minds. Its main weapons are propaganda and mass brainwashing mostly by using disinformation, deception, and lies in a large scale not used against the people of a nation since the end of Nazi Germany. Though important, those elements are just part of a series of carefully planned and executed long- and short-term psychological warfare operations. In synthesis, it is a psychological war.” 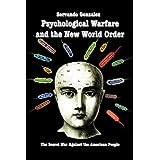 More studies are surfacing each day which confirm the rapidly changing state of Earth’s life support systems and climate. Humanity has decimated the planet in countless ways and the repercussions are becoming catastrophic. Though there are many parts to this unfolding story, the largest piece of the puzzle by far still goes completely unacknowledged by most of the scientific community: stratospheric aerosol geoengineering. Sound like a conspiracy theory? All available data points to the conclusion that geoengineering greatly effects wind patterns and diminishes precipitation overall causing droughts of unprecedented scope and scale…

On May 28 and 29, people across the country are dropping by Congressional district offices to demand Senators and Representatives oppose ANY reauthorization of expiring Patriot Act provisions that violate our civil liberties and our privacy.

These visits are quick and easy, and when lots of us take part in them together, it can send a strong message not only to your member of Congress, but the whole country.

Demand Progress will send you an email with all the info you’ll need — will you join me? Just head to this link to get started: