It’s true.
If you search any three digits and “new cases” on Google you will see a coronavirus headline.

And there is even video–

I have a screen recording pic.twitter.com/9HXjaf3ERL

Google continues to push the coronavirus panic-porn by pushing headlines to their users.
Now imagine what they are doing to President Trump or prominent conservatives every day!…

Lessons from the Lockdown—Why Are So Many Fewer Children Dying?

… As we will show, a balanced view of the broader American COVID-19 experience demonstrates both the scale and variability of its negative outcomes in older Americans, especially the elderly, but also some unexpected positives. Surprisingly, U.S. mortality rates have declined among young people during the lockdown, especially among infants. These trends have gone largely unnoticed and remain unexplained. …

In the analysis that follows we have examined the evidence on total death rates by geography (mostly by state), by age group and by week (and flu season). We have extracted eight main lessons. Some of these are part of the ongoing conversation around COVID-19; others are unexpected or at least have not been widely circulated. Why this discrepancy? Since the infectious disease establishment has controlled the “pandemic” narrative, the variance between this evidence and conventional wisdom is largely driven by longstanding bias and error patterns among the experts in that community. … 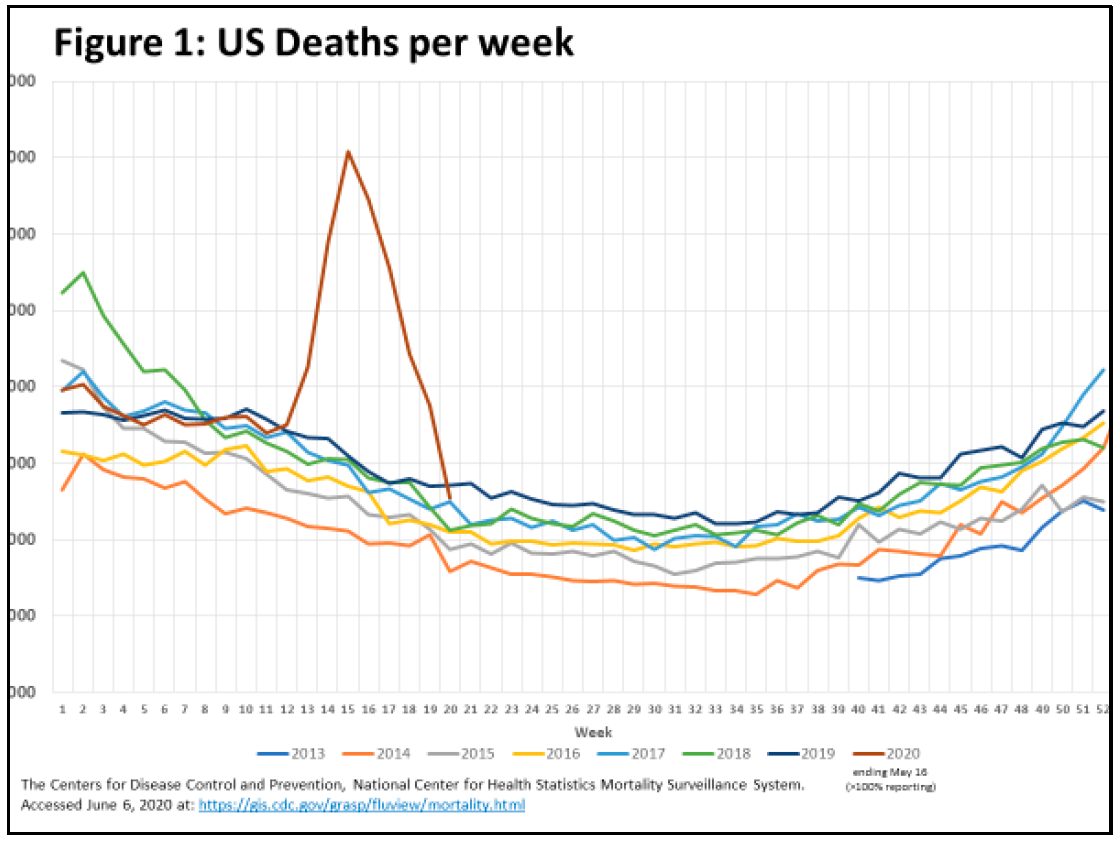 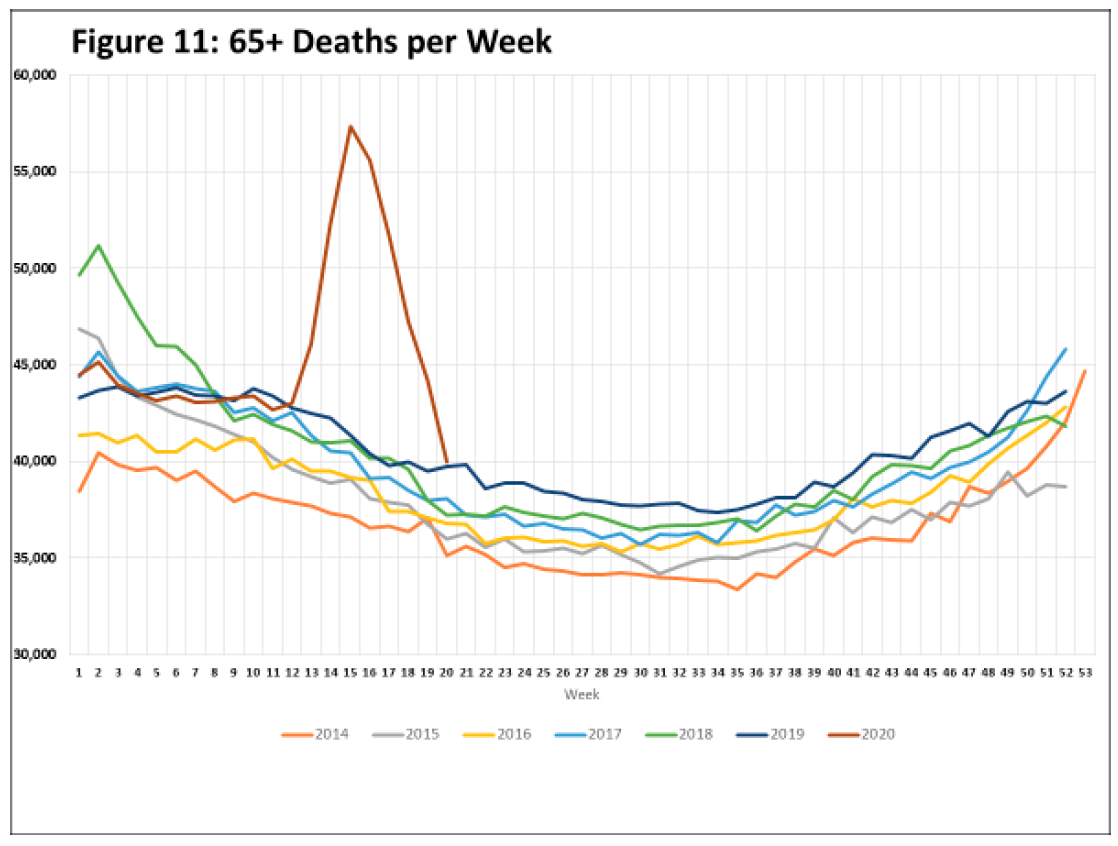 Deaths among children under 18 years of age are relatively rare and show patterns that are different from their seniors. The pronounced cyclical effect in all-cause deaths one sees among adults is entirely absent in children. And whereas weekly deaths among adults dominate the overall US death toll—around 13,000 deaths per week in 18-64-year-olds and 35-40,000 deaths per week among those 65 and older—weekly deaths among children are scattered across the states and typically fall around 700. Well over half of that occurs in infants under 1 year of age.

But the pandemic experience has brought on a surprising effect on this expected death rate among children. Starting in early March, expected deaths began a sharp decline, from an expected level of around 700 deaths per week to well under 500 by mid-April and throughout May. (1)  As untimely deaths spiked among the elderly in Manhattan nursing homes and in similar settings all over the country, something mysterious was saving the lives of children. As springtime in America came along with massive disruptions in family life amid near-universal lockdowns, roughly 30% fewer children died. 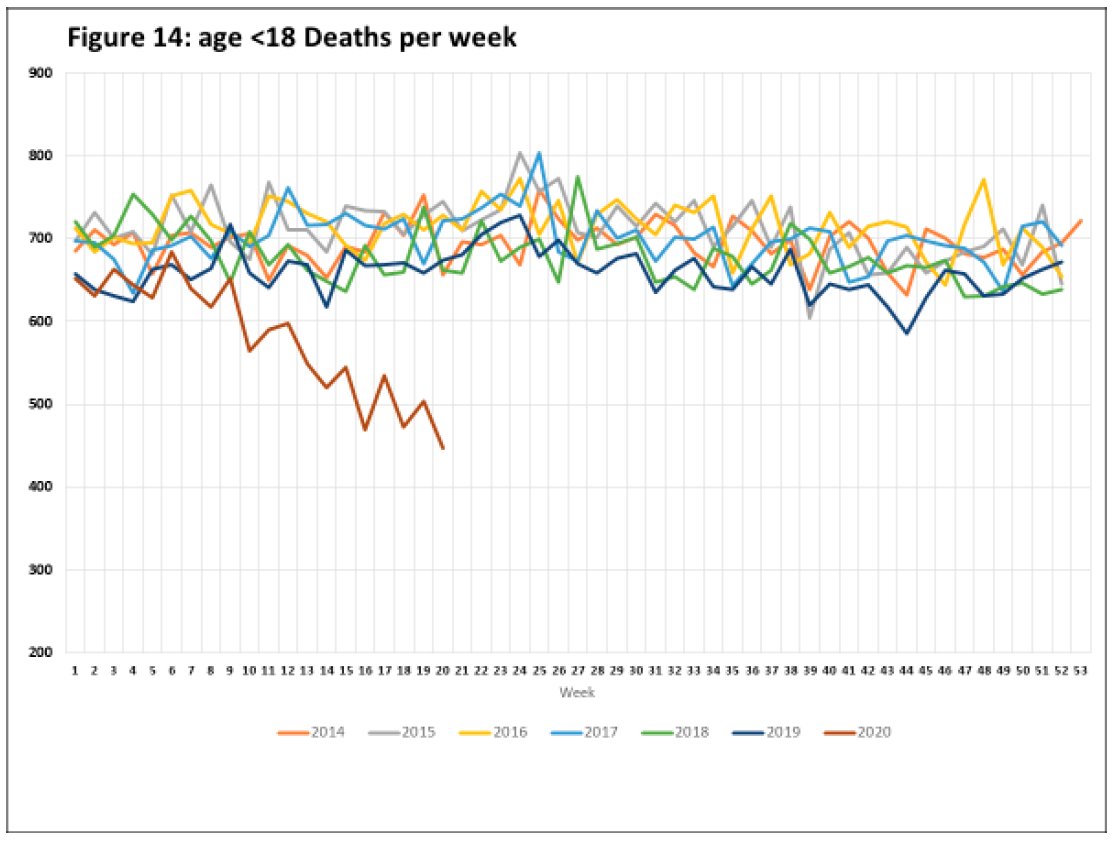 Was this a protective effect of school closures? Were teenagers getting themselves into risky situations at a lower rate? No. There was very little effect among school age children or adolescents. (3) Virtually the entire change came from infants. Somehow, the changing pattern of American life during the lockdowns has been saving the lives of hundreds of infants, over 200 per week…. 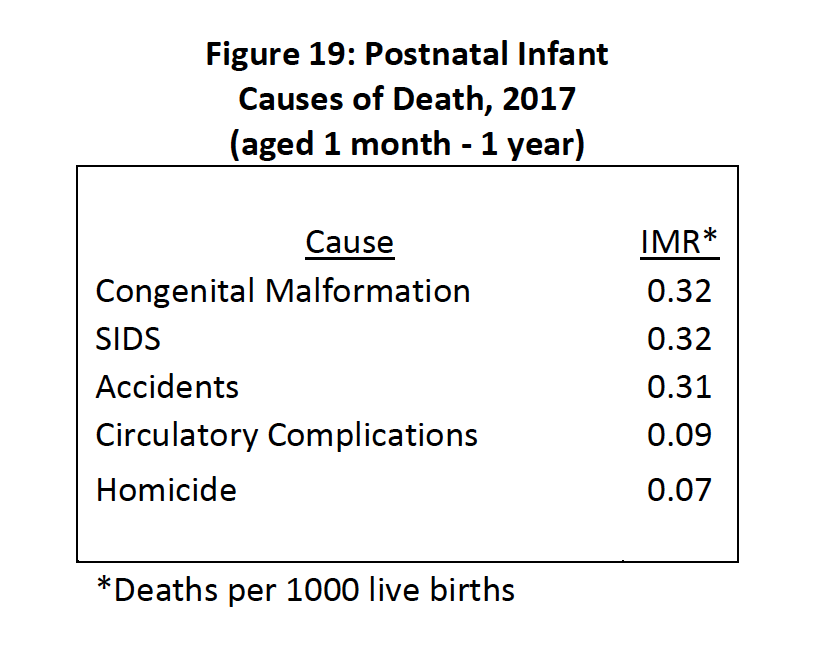 When infants die, the cause is frequently some form of congenital condition or birth defect. Sadly, accidents and homicides are frequent causes as well. There are however, frequent cases in which previously healthy infants die unexpectedly. These deaths are usually classified as “Sudden Infant Death Syndrome” or SIDS.  According to the CDC, SIDS deaths are one of the two largest causes of death among infants aged 1 month to 1 year. (7)

We have no specific data on the trend in SIDS deaths during the pandemic. We have, however, heard anecdotal reports from emergency room (ER) doctors suggesting some have observed a decline in SIDS. One doctor who says he might see 3 cases of SIDS in a typical week has seen zero cases since the pandemic and associated lockdowns began.

What has changed during this period that might have such an effect? Are infant deaths not being recorded? Are parents taking better care of their families while working remotely and their children are not going to school? There are many possible hypotheses about the infant death decline.

One very clear change that has received publicity is that public health officials are bemoaning the sharp decline in infant vaccinations as parents are not taking their infants into pediatric offices for their regular well-baby checks. In the May 15 issue of the CDC Morbidity and Mortality Weekly Report (MMWR), a group of authors from the CDC and Kaiser Permanente reported a sharp decline in provider orders for vaccines as well as a decline in pediatric vaccine doses administered. (8) These declines began in early march, around the time infant deaths began declining. 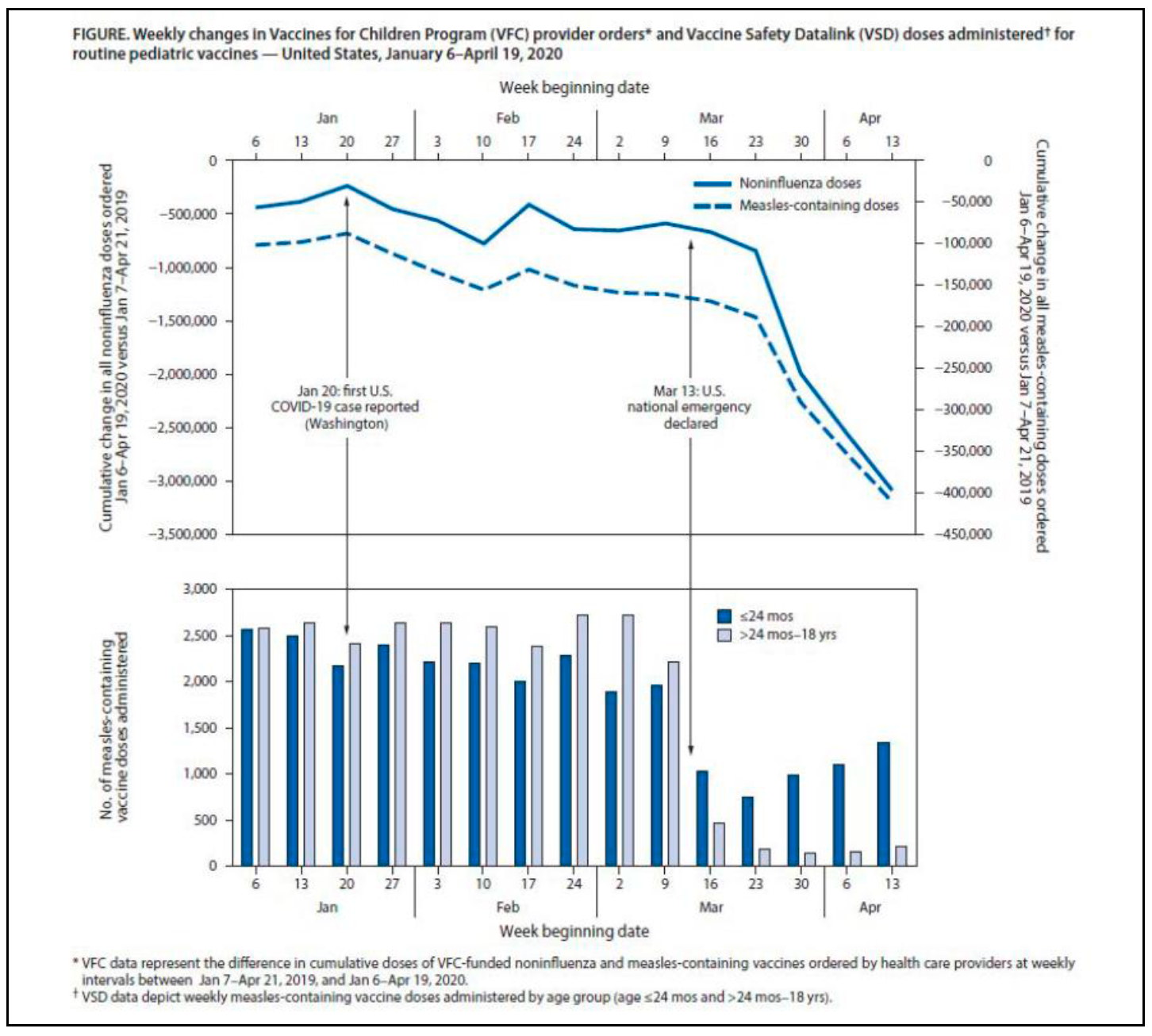 This effect may not be confined to the U.S. The World Health Organization issued a press release on May 22 noting that, “Since March 2020, routine childhood immunization services have been disrupted on a global scale that may be unprecedented since the inception of expanded programs on immunization (EPI) in the 1970s.” (9) Are fewer children dying because their parents are skipping their routine childhood vaccines? If lives are being saved during the pandemic, this is a question that urgently needs answering….

The Centers for Disease Control and Prevention note the following regarding underreporting in most recent weeks. To ensure that the signals we are reporting are not the result of these reporting lags, we have deliberately excluded the most recent four weeks of available data (the charts are week ending May 16, 2020, pulled June 6). Because CDC also re-states historical data every time they refresh their datasets, we also refreshed all reported data for two prior years with every weekly dataset update.

Provisional counts are weighted to account for potential underreporting in the most recent weeks. However, data for the most recent week(s) are still likely to be incomplete. Only about 60% of deaths are reported within 10 days of the date of death, and there is considerable variation by jurisdiction and age. The completeness of provisional data varies by cause of death and by age group. However, the weights applied do not account for this variability. Therefore, the predicted numbers of deaths may be too low for some age groups and causes of death. For example, provisional data on deaths among younger age groups is typically less complete than among older age groups. Predicted counts may therefore be too low among the younger age groups. More detail about the methods, weighting, data, and limitations can be found in the Technical Notes.

The Centers for Disease Control and Prevention

Note that in 2017, SIDS accounted for about 30% of infant deaths, which happens to approximate the percent death rate decrease during the lockdown.  But don’t even THINK about drawing a connection here.   After all, SIDS is the category for unknown causes, and anyway everyone knows vaccines never cause infant deaths, except when they do.

AMA Admits Vaccine Harm to Premie Infants, says “So What?”

When are they going to start arming “fact checkers”?   Can you imagine rachel maddow with an uzi, banging at your door?

Infant Mortality Rates vs Vaccinations Before One Year

Success: 50% more U.S. infants die on the first day than all other industrialized countries combined

The Vaccine Program: Betrayal of Public Trust & Institutional Corruption—Part 7 of 7