The transformation from petty criminal to jihadist terrorist has a long history and numerous high-profile examples. Some, such as failed shoe bomber Richard Reid and would-be dirty bomber Jose Padilla, were converts to Islam and jihadism. Others, such as Abu Musab al-Zarqawi — founder of the terrorist group that became the Islamic State — were lapsed Muslims who returned to their faith in prison. Quite often these prisoners are recruited by jihadists who are in jail for terrorist plots or for preaching their radical brand of Islam. For example, al-Zarqawi spent four years in prison in Jordan with the prominent jihadist ideologue Abu Muhammad al-Maqdisi. …

In Iraq, Islamic State leader Abu Bakr al-Baghdadi spent time imprisoned at Camp Bucca. Many excellent books on the rise of the Islamic State, including ISIS: The State of Terror by Jessica Stern and J.M. Berger, have chronicled how that time was instrumental in deepening his radicalism. These books, especially Charles Lister’s The Syrian Jihad, also note the critical role that Syrian President Bashar al Assad played when he decided to release hundreds of jihadists from prison in 2011, helping lead to the group’s explosive growth….

Getting a Terrorist Education in Prison

The skills that a criminal develops in planning and executing offenses — criminal tradecraft — are not that different from those needed by a terrorist. And that expertise is often far more useful for terrorist attacks in a hostile environment than the type of basic guerrilla warfare skills most jihadists are taught in training camps. In the past, I’ve noted the the similarities between the criminal and terrorist attack cycles.

Jihadists have promoted the leaderless model in their calls for resistance, but this method has one notable flaw: It shortchanges grassroots extremists when it comes to learning terrorist tradecraft. This deficiency often leads to attackers struggling to make successful strikes. Or it can lead to their reaching out for help with bombs or other weapons and ending up being snared in government sting operations. This is where prisons come into play….

Sounds like an excellent business opportunity for an aspiring covert mastermind:

Is the War on Terror a fraud? Have you noticed that when the government declares a war on something, it tends to get worse and not better? President Nixon declared war on drugs in the early 70s, yet since then the number of people incarcerated for drug crimes has risen dramatically. And since President G.W. Bush declared war on terror after 9/11, terrorism has grown and spread worldwide.

Is there a deeper agenda behind all of this? Is it possible that covert groups are manipulating the War on Terror to create more war, knowing that this helps to fill the coffers of the multinationals and those who benefit from them? A highly decorated U.S. general who discovered how he had been manipulated went so far as to write a book titled “War is a Racket.” Another U.S. general stated, “we helped build ISIS.”

The essay below uses easily verified facts to show many ways in which the War on Terror is a fraud. This brilliant article connects the dots on the War on Terror in a way that our major media have sadly failed us. Even the beginning photo of President Reagan in 1985 meeting with members of the Mujahideen in the White House reveals blatant war profiteering. Explore what is written here and verify the links given to prove that things are not always as they seem.

This essay is taken from the incredibly profound online book Lifting the Veil, which uses hundreds of footnotes with links to highly reliable sources which reveal countless political and economic manipulations carried out in secret worldwide by powerful, well-hidden groups for decades. By educating ourselves and shining light into these shadows, we can create powerful change that will transform our lives and world for the better. Thanks for caring. Please spread the word and don’t miss our “What you can do” section….

There’s more than irony involved in how problems are exacerbated when they’re targeted by the state.   It’s the same business model as the “war on drugs”.   When you access the financing and public trust and legal status to fix a problem, you simultaneously get access to the means to perpetuate and profit from it.    Do you really think the  cancer industry is looking for a cure, or is it skimming while funneling research dollars into dead ends?   Why is obstetrical medicine creating medical crises out of normal deliveries?   How did normal male sexual anatomy become a birth defect?  Obviously the war on terror could be seen as a vast money laundering operation even without the abundant and obvious evidence that 9/11 itself was a false flag.    This is a generic and systemic problem with pervades every aspect of our economy and government.

… By my own “guesstimate,” ISIS is the result of a failed US Army behavioral modification program at Camp Bucca, Umm Qasr, Iraq, between 2007 and its closure in 2009.

If it is true that alleged ISIS leader “Abu Bakr al-Baghdadi” was ever in Camp Bucca then he went through the Camp 134 Process, subjecting him to a “behavior modification” process, part of a “proactive counterinsurgency strategy” for detention operations (according to Detention Operations, Behavior Modification, and Counterinsurgency, from the US ARMY COMBINED ARMS CENTER). If al-Baghdadi or other ISIS members were at Bucca, they were herded through a dividing process, which identified the “unreconcilable” insurgents, in order to sequester them away from the general population. “Moderates or former extremists moving toward moderation” were separated for special treatment intended turn them away from extremist beliefs, before “releas[ing] them to return to their homes as “moderate missiles of the mind.” The mission at Bucca was to “modify the behavior of detainees so that when they reenter Iraqi society, they are no longer threats to the Iraqi government and coalition forces but rather agents of change for the future of Iraq.”

Before pursuing the question of the truth about ISIS, we must ask whether this behavior modification process successful, or did it have an unanticipated opposite result? It seems pretty obvious from our perspective that graduates of the ISIS program went on to become the world’s most notorious terrorist army, a grave threat to world peace? Was this the result of a failed overt detainee/prisoner strategy, or was this the intended result? Was the US Army training terrorists at Bucca, or did its proactive counterinsurgency strategy for detention operations” to turn the prison system into “a legitimate arena for counterinsurgency actions“ backfire miserably, producing a generation of terrorist-jihadis like the world has never seen?

Consider what follows to be “hole-filler” in that storyline, hopefully helping readers to link the terrorists back to their state sponsors. 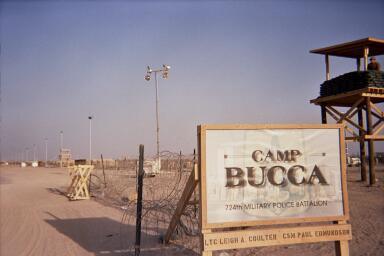 Saudi Al-Arabiya provided the graphic answer below (making the text automatically suspicious). Click on the photo or the Arabiya link to view readable text.– 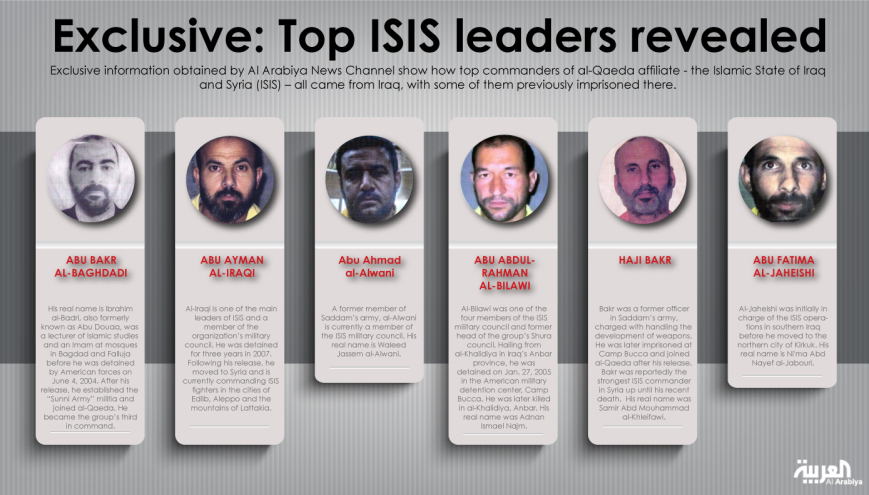 What is significant about Camp Bucca?

It was the primary site for an experimental US Army behavioral modification program, Task Force 134, “Detention Operations Process,” which got into detainees home and their lives, as well as reconditioning their heads….

“Many of us at Camp Bucca were concerned that instead of just holding detainees, we had created a pressure cooker for extremism.”–James Skylar Gerrond, a former compound commander at Camp Bucca in 2006 and 2007

Critics of the facility say it had in effect become a terror training institute, run by resentful inmates under a strict interpretation of Islamic law.

“It is al-Qa’ida central down there,” said Sheikh Ali Hatem Suleiman, a tribal leader from Anbar province. “What better way to teach everyone how to become fanatical than put them all together for scant reason, then deprive them?”…

Sept. 17, 2009, Camp Bucca Detention Center Closes in Iraq…thousands of inmates are set free in southern Iraq, near the Kuwaiti border.

“An Air Force C-17 carrying the last group of 180 detainees lifted off from the Basra airport headed to Camp Cropper.”

AL-QAIDA IN IRAQ ON THE ROPE

The following is also taken from the July 22, 2008 al‐Qa`ida’s Road In and Out of Iraq. Analysis from West Point expert on Iraq, Dr. Michael Knights–

” AQI is a wounded organization….foreign fighters are now trying to leave the country.”

“The Sunni insurgencies (plural) are being kept on life support.”

“It is clear that AQI has benefited from an unprecedented infusion of trained terrorist manpower. Many of the released persons spent time planning inside detention facilities like Camp Bucca and Camp Cropper, specifically so they could launch a smarter, stronger insurgent effort one day.”…

Why is it that no researchers have asked the question “How did AQI suddenly acquire enough money and equipment to turn a failing terrorist entity into an “Islamic Caliphate” overnight?” Even if they did bully the Free Syrian Army and take their weapons,pull-off a “string of bank robberies,” kidnappings and extortion, AQI could never have come up with enough cash to run an army, or to buy a fleet of shiny new Toyota trucks, or to become one of the best-paying employers in the Middle East, without being on some state’s payroll.

Democracy Now Demonstrates What It Means to Be a “Good German”

US torture continues at Guantanamo Bay

The CIA and the Crack Cocaine Epidemic

Civilization is in a tailspin – everything is backwards, everything is upside down- doctors destroy health, psychiatrists destroy minds, lawyers destroy justice, the major media destroy information, governments destroy freedom and religions destroy spirituality – yet it is claimed to be healthy, just, informed, free and spiritual. We live in a social system whose community, wealth, love and life is derived from alienation, poverty, self-hate and medical murder – yet we tell ourselves that it is biologically and ecologically sustainable.

CDC Buried Its Own 3 Studies On Defensive Use of Guns