The question has to be asked: is he a chinese intelligence operative? http://thoughtcrimeradio.net/?s=collateral

(Natural News) Fake News. The term that didn’t even exist five years ago has now become everybody’s favorite way to suppress free speech. The latest person to jump on the censorship bandwagon is California’s Senator Richard Pan, the very same politician who has already done untold damage by mandating vaccinations for all Californian schoolchildren with his infamous SB277 bill of 2015.

As reported by Natural Health 365, Senator Pan has proposed a new bill entitled “SB1424 Internet: social media: false information: strategic plan,” which would make it a crime to raise questions about any “official story” put forth by the government. That, of course, would include the official vaccine story, namely that all vaccines are good, safe and side effect free, and that a healthy nation is a vaccinated nation. (Related: The dirty history of Big Pharma’s scientific censorship, oppression and destruction of human knowledge.)

Natural Health 365 explained how this bill would threaten free speech and the right to question the official vaccine narrative:

Any person operating an Internet site in California would be obligated to develop a strategic plan to verify any news stories shared on the site. The plan must also have measures to mitigate the spread of false information by using fact-checkers to verify the stories and provide outreach to social media users. A “fake news” warning must be placed on any news story that contains false information.

The bill, if it passes, will require agencies of the California government to develop numerous laws for its enforcement, including penalties for so-called “speech criminals.”…

Did we ever really get independence from these blood sucking parasites?   Will the UK itself ever get free of their clutches?

ABC, CBS, NYT, CNN, Fox, Time, People, Variety and on and on all have glitzy high gloss spreads on their sites about this total non-event of a “royal wedding”.   But if you know how to read the media, it can actually be instructive insofar as it hints at the hidden power structures in this world.

There seem to be bifurcations among the western, russian and chinese elites which themselves originated from centuries of dissimilar organic regional public history, religion and economic development, banking dynasties and secret societies.   The western vampires have been trying to merge the other two mafias under their umbrella with limited success.   Russia is basically a lost cause and china is veering off course due to trump’s surprise presidency.  High level chaos is preferable to a seamless democidal dictatorship as far as I’m concerned.

Obviously this is the stuff of major wars.   Hold on to your seat.

Interestingly, these 3 power blocs are foreshadowed in George Orwell’s novel “1984” 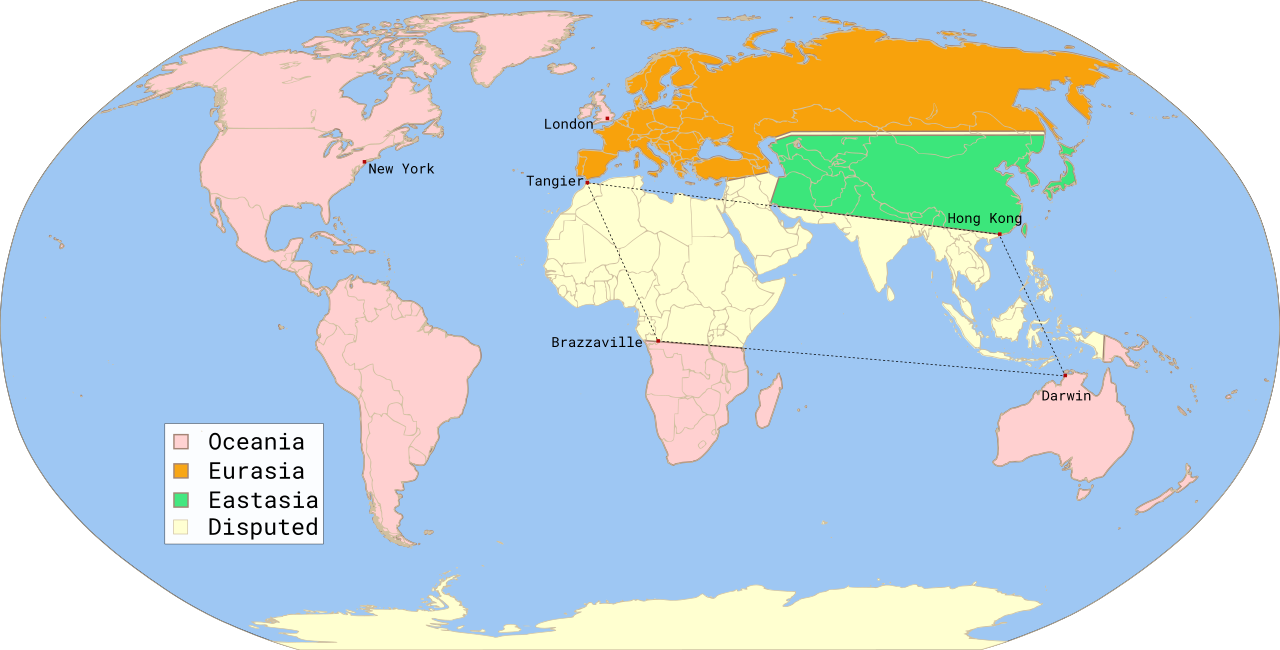 If you think the world isn’t being deliberately pushed away from the dollar by US foreign policy you’re dreaming.   These people aren’t stupid, they know exactly what they’re doing.  It’s as if the state department has declared war on the USA.   The economic catastrophe which will surely result will vastly enrich the neocon’s benefactors among the ultra-wealthy.  This is disaster capitalism, and all it takes is a few well-placed moles.

May 18, 2018 “Information Clearing House“ –  Iran, under a renewed threat of U.S. sanctions returning, two months ago decided to switch using the greenback as a currency in its imports and banned all traders from using USD. A directive came from the Ministry of Industry, Mine and Trade. Iran was being backed into a corner and was facing a situation of having has no access to dollar transactions because of the sanctions. Hence, it decided to remove that threat. Now instead of using banks, it has to use a network of foreign exchange bureaus and even gone the distance by saying it wants no transactions at all in USD.

This was quickly but quietly followed up with a Reuters report at the same time in March that China was now ready to start testing its new system and that regulators had asked a handful of financial institutions to prepare for pricing China’s crude imports in the yuan. Since the launch in May, the interest in the renminbi-backed oil contracts has steadily increased. Traded daily volumes hit a record 250,000 lots within two weeks and surprisingly the share of yuan contracts in global trading jumped to 12 percent from 8 percent just eight weeks earlier.

Then, an industry news source for the oil and gas industry reported on April 9th that Russia was considering replacing the U.S. dollar in crude oil payments on deals with Turkey and Iran, Energy Minister Alexander Novak said….