… “Multiple personality disorder patients in treatment throughout the United States and Canada are describing involvement in mind control research that is much more sophisticated than MKULTRA.  Deliberate sexual abuse of children to make them more dissociative … I would be pleased to testify at length at any hearings on CIA and military mind control.” Colin Ross, M.D. Psychiatrist Richardson Texas

Here is a statement from a therapist submitted anonymously. “One client told me that they were made to believe they had been abducted by UFO’s so that if memories were retrieved, they would be discredited by the community.” I found that kind of interesting. Hmmm. Other people mentioned satanic costumes … CIA people putting on satanic costumes while they were doing their crazy stuff here …

The most interesting facet of the alien abduction phenomenon are accounts of abductees who succeeded in repelling the “alien” or demon by invoking the name of Jesus Christ. CE4 Research Group has a website with first person testimonies of those encounters. Below is a sample that I culled from a fifth of the testimonies:…

Who is being abducted?

The Roper Organization’s previous statistics showed that about one percent of all American adults could be placed into a category they termed “influentials.” Influentials were adults, ages 35 to 45, who had higher than average incomes and held positions of political or social authority. They were “trend setters,” defining morality and public policy. They were leaders rather than followers. Roper surveys regularly focused on this group for a variety of clients who valued their opinions. The new survey results showed that a surprisingly large number of these “trend setters” seemed to have been abducted.

While the details of the abductee profile are best left undefined for the purposes of future diagnosis and treatment of post-traumatic syndrome, the Roper analysis showed the following positive responses to be unique: 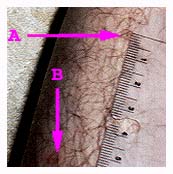 Certain types of scars or blemishes can follow an abduction.

(Right) A “scoop” in skin, A, appears as a non red depression and is often adjacent to a hard subcutaneous bump, B.(Ruler shows centimeters.)

… A few commands are typed into a computer outside the chamber, and selected electromagnetic fields begin gently thrumming my brain’s temporal lobes. The fields are no more intense than what you’d get as by-product from an ordinary blow-dryer, but what’s coming is anything but ordinary. My lobes are about to be bathed with precise wavelength patterns that are supposed to affect my mind in a stunning way, artificially inducing the sensation that I am seeing God.

I’m taking part in a vanguard experiment on the physical sources of spiritual consciousness, the current work-in-progress of Michael Persinger, a neuropsychologist at Canada’s Laurentian University in Sudbury, Ontario. His theory is that the sensation described as “having a religious experience” is merely a side effect of our bicameral brain’s feverish activities. Simplified considerably, the idea goes like so: When the right hemisphere of the brain, the seat of emotion, is stimulated in the cerebral region presumed to control notions of self, and then the left hemisphere, the seat of language, is called upon to make sense of this nonexistent entity, the mind generates a “sensed presence.”

Persinger has tickled the temporal lobes of more than 900 people before me and has concluded, among other things, that different subjects label this ghostly perception with the names that their cultures have trained them to use – Elijah, Jesus, the Virgin Mary, Mohammed, the Sky Spirit. Some subjects have emerged with Freudian interpretations – describing the presence as one’s grandfather, for instance – while others, agnostics with more than a passing faith in UFOs, tell something that sounds more like a standard alien-abduction story….