In July of 2017, investigative journalist Dilyana Gaytandzhieva broke a bombshell report in the Trud newspaper, the largest Bulgarian daily newspaper. The story exposed a convert weapons shipment network to terrorist in groups in Syria via diplomatic flights, under the CIA’s watch.

Since then, the journalist says the Bulgarian authorities have interrogated her, have demanded she reveals her sources and the newspaper eventually fired her.

Following a month-long investigation, Gaytandzhieva says she found an Azerbaijan state airline was frequently transporting weapons to the United Arab Emirates, Saudi Arabia and Turkey under diplomatic cover. The transportation of weaponry was, according to Gaytandzhieva, part of the CIA’s secret programme to supply anti-Assad fighter in Syria. The Bulgarian journalist says she found that the weapons made their way to al-Qaeda and ISIS terrorists in Syria and Iraq….

Many people do not realize that America is not only entering a new year, but within the next month we will also be entering a new economic era. In early February, Janet Yellen is set to leave the Federal Reserve and be replaced by the new Fed chair nominee, Jerome Powell. Now, to be clear, the Fed chair along with the bank governors do not set central bank policy. Policy for most central banks around the world is dictated in Switzerland by the Bank for International Settlements. Fed chairmen like Janet Yellen are mere mascots implementing policy initiatives as ordered.  This is why we are now seeing supposedly separate central banking institutions around the world acting in unison, first with stimulus, then with fiscal tightening.

However, it is important to note that each new Fed chair does tend to signal a new shift in action for the central bank. For example, Alan Greenspan oversaw the low interest rate easy money phase of the Fed, which created the conditions for the derivatives and credit bubble and subsequent crash in 2008. Ben Bernanke oversaw the stimulus and bailout phase, flooding the markets with massive amounts of fiat and engineering an even larger bubble in stocks, bonds and just about every other asset except perhaps some select commodities. Janet Yellen managed the tapering phase, in which stimulus has been carefully and systematically diminished while still maintaining delusional stock market euphoria.

Now comes the era of Jerome Powell, who will oversee the last stages of fiscal tightening, the reduction of the Fed balance sheet, faster rate increases and the final implosion of the ‘everything’ bubble.

As I warned before Trump won the election in 2016, a Trump presidency would inevitably be followed by economic crisis, and this would be facilitated by the Federal Reserve pulling the plug on fiat life support measures which kept the illusion of recovery going for the past several years. It is important to note that the mainstream media is consistently referring to Jerome Powell as “Trump’s candidate” for the Fed, or “Trump’s pick” (as if the president really has much of a choice in the roster of candidates for the Fed chair). The public is being subtly conditioned to view Powell as if he is an extension of the Trump administration.

This could not be further from the truth. Powell and the Fed are autonomous from government.

As Alan Greenspan openly admitted years ago, the Fed does not answer to the government and can act independently without oversight.

So, why is the media insisting on misrepresenting Powell as some kind of Trump agent?Because Trump, and by extension all the conservatives that support him, are meant to take the blame when the ‘everything’ bubble vaporizes our financial structure. Jerome Powell is “Trump’s guy” at the Fed; so any actions Powell takes to crush the recovery narrative will also be blamed on the Trump administration.

But, is it a certainty that Powell will put the final nail in the coffin of “economic recovery?” Yes. Last Friday the Fed finally released the transcripts of its monetary policy meetings in 2012, and in those transcripts are some interesting admissions from Powell himself. After reading these transcripts I am fully convinced that Powell is the man who will stand as the figurehead of the central bank during the final phase of U.S. decline.

Here are some of the most astonishing quotes by Powell from those transcripts along with my commentary. These quotes are yet another piece of evidence that vindicates my position on the Fed as an economic saboteur and my position on the historic market bubble the bank has created:…

A second member of a three-man team who created a secure system for whistleblowers to submit information to news outlets has committed suicide at the age of 36, reports the Freedom of the Press Foundation. Software engineer James Dolan took his own life nearly five years to the day after the death of “SecureDrop” co-creator and Reddit co-founder Aaron Swartz.

Dolan, a former Marine, helped create the system in 2012 along with Swartz and Wired editor Kevin Poulsen – who spearheaded the project first known as “StrongBox” and later “DeadDrop.” The trio’s secure submission system has been used by The New Yorker, the Washington Post, The New York Times, the Associated Press and Gizmodo – allowing “highly secure communication between journalists and sources in possession of sensitive information or documents,” per Gizmodo. …

Edit: maybe I should be asking whether trump himself is an NWO mole!  http://thoughtcrimeradio.net/2018/01/catherine-fitts-outs-roger-stone-as-swamp-creature/

Of course Trump is surrounded by enemies, that was totally predictable given what he’s up against.   It’s good that he has his own private army of bodyguards, especially given the culpability of the secret service in JFK’s carefully choreographed assassination and subsequent media coverup.

How easy would it be for someone to slip some drug into his food that makes him act crazy, just in time for a press conference?   Expect it.

And don’t tell me his twittering is evidence of instability.   It’s a very successful strategy for bypassing the genocidal pedophile satanic eugenicists who control the MSM.   He talks plainly, sometimes rashly.  He’s reckless at times.  I believe (or hope) that his rhetoric toward NK is a diversion from his real agenda, which hopefully is the take down of the global invisible satanic empire.  Would you prefer the polished deception of obama or hillary, who were biting at the bit to start a war with russia?

There will be no coincidences or accidents in this political climate.   Either Trump serves out his term without mysterious glitches in his appearance or behavior, or the satanic terrorists win.  Thinking people of all stripes need to support him and be thankful for him, given what the alternative was.

How to Stop Terror Attacks

Since US Voting is a Farce, Russian “Meddling” is a Joke

Mark Zuckerberg is stepping into the new year with an apology tour. The Facebook chief executive spent a good portion of 2017 warding off lawmakers and investigators trying to figure out how much of a role his company played in Russia’s interference in the 2016 election. So naturally, Zuckerberg felt the need to announce his New Year’s resolution last week: Fix Facebook.

The problem is, Zuckerberg can’t fix Facebook. By its very nature, the social-media network may be doomed to cause further damage to the American political system — no matter how much it tinkers with its algorithms or changes the way foreign governments place ads on its site. In the end, the problem lies with Facebook’s users.

We can imagine Facebook as an endless labyrinth of tunnels and caverns connecting its billions of users. Most of those tunnels are benign, allowing people to share news, birthday wishes and videos of corgi puppies. But there are some tunnels, deep in the darkest parts of the site, where users subsist on misinformation feeding into their worst biases. And there’s no topic that illustrates this better than vaccines….

Don’t worry, our great leaders have a solution to fix the “broken” american people:

Brzezinski: It is infinitely easier to kill a million people than to control them 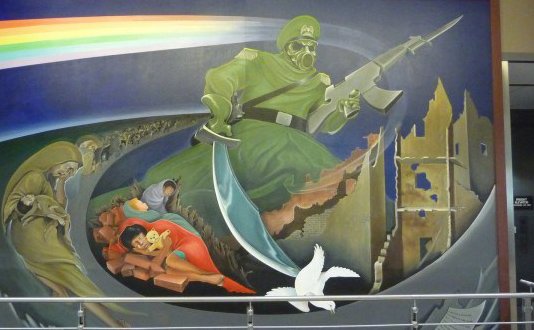 OK, this place is evil.

But seriously, there are so many irregularities surrounding the DIA, that a voluminous book could be written on the subject. The facilities and the art displayed lead many observers to believe that the DIA is much more than an airport: it is literally a New-Age cathedral, full of occult symbolism and references to secret societies. The art at the DIA is NOT an aggregation of odd choices made by people with poor taste, like many people think. It is a cohesive collection of symbolic pieces that reflect the philosophy, the beliefs and the goals of the global elite. The DIA is the largest airport in America and it has cost over 4.8 billion dollars. Everything regarding this airport has been meticulously planned and everything is there for a reason….