Ten years ago today, the US and British military (with a posse of cowed ‘allies’ in tow) launched ‘Operation Iraqi Freedom’ aka ‘Shock and Awe’ aka, ‘Operation Destroy the Critical Infrastructure of Iraq and Initiate an Overt Decade-long Attack on – and Occupation of – the Iraqi People.’ To date, at least 1.5 million Iraqi civilians have been murdered, and at least 5 million displaced from their homes as a direct result of ‘liberation’. This on top of millions killed and impoverished by US-led economic sanctions in the preceding decade. Deadly car bombings continue to this day. Suffice to say, Iraq was not liberated: it was destroyed, and destroyed deliberately.

Last week, the UK Guardian newspaper published the results of a 15-month investigation by the Guardian and BBC Arabic. Euphemistically titled ‘James Steele: America’s mystery man in Iraq‘, the video report presents fairly damning evidence that, in the immediate aftermath of the US invasion of Iraq, the US Govt. and military began to assemble a 10,000 strong ‘Shia militia’ that, under US command, would be used to do three things: 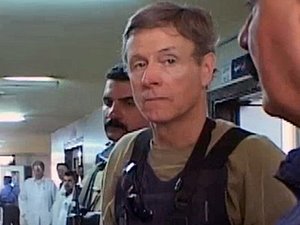 While the 50 minute documentary is proof enough that Rumsfeld, Cheney, General Petraeus, and all the other NeoCon warhawks and CIA monsters consciously employed the services of former US Army Colonel James Steele in the organisation of death squads against the Iraqi grass-roots resistance (a tactic that he, Steele, had used against resistance movements in South America in the 1970s and 90′s), it panders to the official narrative that ‘sectarianism’ in Iraq was the root cause of the carnage that unfolded.

The so-called ‘Shia militia’ used by the American government (with the help and advice of British and Israeli counter-insurgency ‘experts’) were recruited directly by the CIA and people like James Steele to carry out extra-judicial murders of anyone they could loosely identify as ‘resistance’. In order to cloak this strategy, indiscriminate attacks on Iraqi civilians, Shia and Sunni alike, were carried out on a massive scale. Some of these individuals, in another setting, would be called ‘al-Qaeda’. Their usefulness in the employ of US warhawks in the Pentagon was doubly valuable because they both justified continued US occupation and provided ‘proof’ for the American War on Terror mythology, ex post facto, that the US was at war with the perpetrators of 9/11. …

Saddam Started Out as CIA Assassin

US Tried and Failed to Plant WMD’s in Iraq

The Real Purpose of the War on Iraq

This is nazi germany with lipstick.