On the weekend of November 16th, the G20 leaders whisked into Brisbane, posed for their photo ops, approved some proposals, made a show of roundly disapproving of Russian President Vladimir Putin, and whisked out again. It was all so fast, they may not have known what they were endorsing when they rubber-stamped the Financial Stability Board’s “Adequacy of Loss-Absorbing Capacity of Global Systemically Important Banks in Resolution,” which completely changes the rules of banking.

Russell Napier, writing in ZeroHedge, called it “the day money died.” In any case, it may have been the day deposits died as money. Unlike coins and paper bills, which cannot be written down or given a “haircut,” says Napier, deposits are now “just part of commercial banks’ capital structure.” That means they can be “bailed in” or confiscated to save the megabanks from derivative bets gone wrong.

Rather than reining in the massive and risky derivatives casino, the new rules prioritize the payment of banks’ derivatives obligations to each other, ahead of everyone else. That includes not only depositors, public and private, but the pension funds that are the target market for the latest bail-in play, called “bail-inable” bonds.

“Bail in” has been sold as avoiding future government bailouts and eliminating too big to fail (TBTF). But it actually institutionalizes TBTF, since the big banks are kept in business by expropriating the funds of their creditors.

It is a neat solution for bankers and politicians, who don’t want to have to deal with another messy banking crisis and are happy to see it disposed of by statute. But a bail-in could have worse consequences than a bailout for the public. If your taxes go up, you will probably still be able to pay the bills. If your bank account or pension gets wiped out, you could wind up in the street or sharing food with your pets.

In theory, US deposits under $250,000 are protected by federal deposit insurance; but deposit insurance funds in both the US and Europe are woefully underfunded, particularly when derivative claims are factored in. The problem is graphically illustrated in this chart from a March 2013 ZeroHedge post: 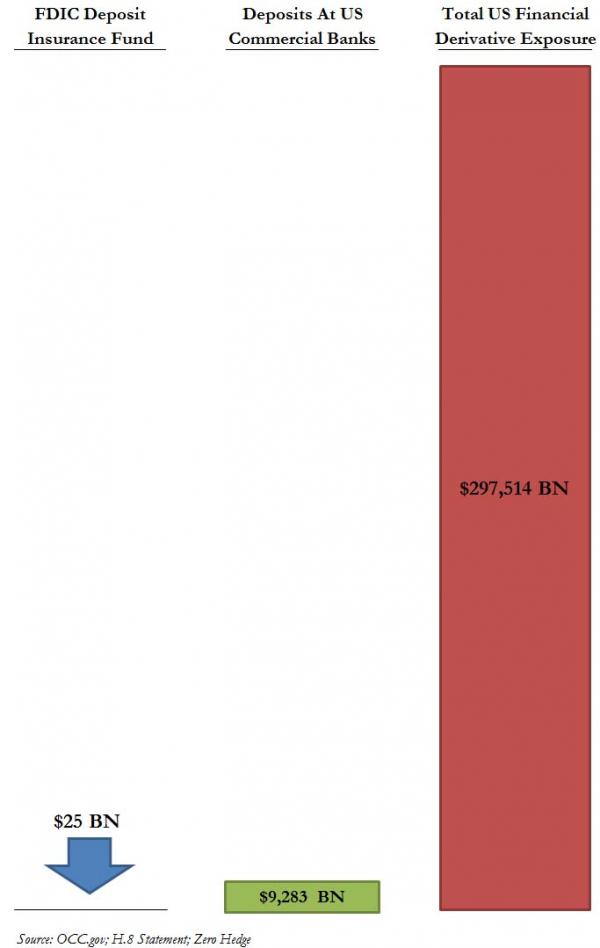 More on that after a look at the new bail-in provisions and the powershift they represent.

The Financial Stability Board (FSB) that now regulates banking globally began as a group of G7 finance ministers and central bank governors organized in a merely advisory capacity after the Asian crisis of the late 1990s. Although not official, its mandates effectively acquired the force of law after the 2008 crisis, when the G20 leaders were brought together to endorse its rules. This ritual now happens annually, with the G20 leaders rubberstamping rules aimed at maintaining the stability of the private banking system, usually at public expense.

According to an International Monetary Fund paper titled “From Bail-out to Bail-in: Mandatory Debt Restructuring of Systemic Financial Institutions”:

[B]ail-in . . . is a statutory power of a resolution authority (as opposed to contractual arrangements, such as contingent capital requirements) to restructure the liabilities of a distressed financial institution by writing down its unsecured debt and/or converting it to equity. The statutory bail-in power is intended to achieve a prompt recapitalization and restructuring of the distressed institution.

The language is a bit obscure, but here are some points to note:

The hand that gives is above the hand that takes. Money has no motherland; financiers are without patriotism and without decency: their sole object is gain.