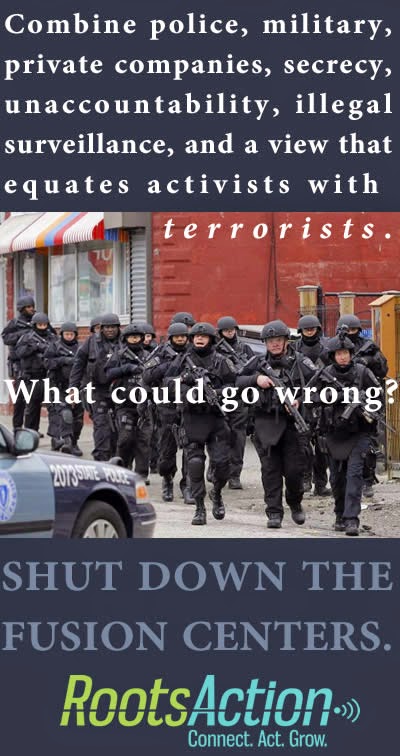 Click here & here to petition our politicians to end Fusion Centers.
The Government Accountability Office has come out with a new report that exposes the lack of accountability for use of federal funds at fusion centers. But it doesn’t address the most serious issue with fusion centers: that they’re yet another weapon in the government’s bloated surveillance arsenal—and there’s virtually no oversight for what they’re doing and how they may be violating peoples’ rights.
The sheer numbers (800,000-plus officers) of local law enforcement working in the U.S. is staggering and enlisting them in the surveillance state exponentially multiplies the potential for privacy and civil liberties violations.
New documents roll back the curtain on the Fusion Centers and show the communications, interactions and emails of a massive national web of federal agents, officials, police, and private “security” contractors to accumulate and share information, reporting on all manner of peaceful and lawful political activity that took place during the Occupy Movement from protests and rallies to meetings and educational lectures. This enormous spying and monitoring apparatus included the Pentagon, FBI, DHS, police departments and chiefs, private contractors and commercial business interests.
There is now, with the release of these documents, incontrovertible evidence of systematic and not incidental conduct and practices of the Fusion Centers and their personnel to direct their sights against a peaceful movement that advocated social and economic justice in the United States.
These documents, along with materials previously released by the PCJF that exposed the FBI and other domestic intelligence and law enforcement agencies’ targeting of Occupy, reveal a U.S. surveillance-industrial apparatus charging forward in willful disregard for the fundamental civil liberties and political freedoms of the people. Targeting a peaceful social justice movement as a criminal or terrorist enterprise is incompatible with a constitutional democracy.
These documents show that the Fusion Centers constitute a menace to democracy. This gross misuse of U.S. taxpayers’ money also demonstrates that the Fusion Centers are a colossal rat hole of waste….