What appear to be private contractors, wearing unmarked, matching uniforms and operating an unmarked SUV affixed with communication equipment near the finish line of the Boston Marathon shortly after the bomb blasts – can be seen beforehand, standing and waiting just meters away from where the first bomb was detonated.

The contractor-types had moved away from the bomb’s location before it detonated, and could be seen just across the street using communication equipment and waiting for similar dressed and equipped individuals to show up after the blasts.

The men, numbering between 6-8 then begin tearing up the skirting around temporary bleachers erected for the event, opposite the explosion, before taping it off. Then, what appears to be an FBI bomb squad truck pulls up directly behind the contractor-types’ SUV, with a woman clearly wearing the letters F.B.I. on her tactical vest emerging and speaking with the contractor-types. Together they disappear from the scene, leaving their vehicles behind. 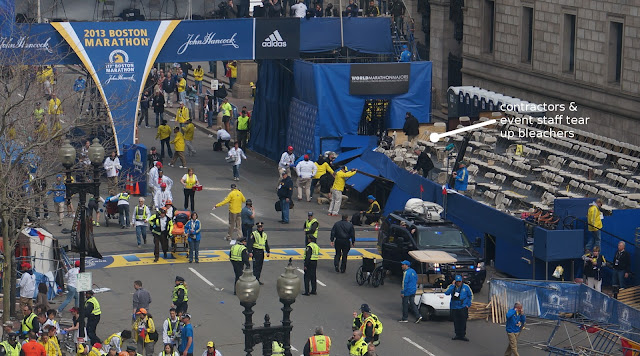 It should be noted, that with the exception of the contractor-types, all other responders at the scene, including the FBI agent, can be clearly identified, from police to the fire department, to medics and even individuals wearing vests with “B.A.A. Physician” written on them. It should also be noted that no other uniformed individuals can be seen standing near the bomb site aside from the contractor-types.

These men were unidentified, professional contractors apparently augmenting public servants at the Boston Marathon, present before and after the bomb blasts in the direct vicinity of the incident. After the blasts, whether it was their intended function or not, they appeared to be searching for something under the bleachers before being joined by what appears to be the FBI bomb squad. The FBI and the city of Boston has so far categorically failed to provide any information on these highly suspicious individuals.

We’re seeing a multi-front assault on our institutions, from Boston to Wall St. to the COMEX, plus the capture of our regulatory agencies across the board. The chart that accompanies this article leaves no doubt as to the deliberate nature of last week’s precious metals collapse. These are not normal market forces at play. Plan accordingly.

The gold futures markets opened in New York on Friday 12th April to a monumental 3.4 million ounces (100 tonnes) of gold selling of the June futures contract (see below) in what proved to be only an opening shot. The selling took gold to the technically very important level of $1540 which was not only the low of 2012, it was also seen by many as the level which confirmed the ongoing bull run which dates back to 2000. In many traders minds it stood as a formidable support level… the line in the sand.

Two hours later the initial selling, rumoured to have been routed through Merrill Lynch’s floor team, by a rather more significant blast when the floor was hit by a further 10 million ounces of selling (300 tonnes) over the following 30 minutes of trading. This was clearly not a case of disappointed longs leaving the market – it had the hallmarks of a concerted ‘short sale’, which by driving prices sharply lower in a display of ‘shock & awe’ – would seek to gain further momentum by prompting others to also sell as their positions as they hit their maximum acceptable losses or so-called ‘stopped-out’ in market parlance – probably hidden the unimpeachable (?) $1540 level.

The selling was timed for optimal impact with New York at its most liquid, while key overseas gold markets including London were open and able feel the impact. The estimated 400 tonne of gold futures selling in total equates to 15% of annual gold mine production – too much for the market to readily absorb, especially with sentiment weak following gold’s non performance in the wake of Japanese QE, a nuclear threat from North Korea and weakening US economic data. The assault to the short side was essentially saying “you are long… and wrong”

Futures trading is performed on a margined basis – that is to say you have to stump up about 5% of the actual cost of the gold itself making futures trades a highly geared ‘opportunity’ of about 20:1 – easy profit and also loss ! Futures trading is not a product for widows and orphans. The CME’s 10% reduction in the required gold margins in November 2012 from $9133/contract to just $7425/contract made the market more accessible to those wishing both to go long or as it transpired, to go short. Soon after we saw the first serious assault to the downside in Dec 2012, followed by further bouts in January 2013 – modest in size compared to the recent shorting but effective – it laid the ground for what was to follow. One fund in particular, based in Stamford Connecticut, was identified as the previous shorter of gold and has a history of being caught on the wrong side of the law on a few occasions. As badies go – they fit the bill nicely.

The value of the 400 tonnes of gold sold is approximately $20 billion but because it is margined, this short bet would require them to stump up just $1b. The rationale for the trade was clear – excessively bullish forecasts by many banks in Q4 seemed unsupported by follow through buying. The modest short selling in Jan 2013 had prompted little response from the longs – raising questions about their real commitment. By forcing the market lower the Fund sought to prompt a cascade or avalanche of additional selling, proving the lie ; predictably some newswires were premature in announcing the death of the gold bull run doing, in effect, the dirty work of the shorters in driving the market lower still.

This now leaves the gold market in an interesting conundrum – the shorter is now nursing a large gold position and, like the longs also exposed – that is to say the market is polarised between longs and shorts and they cannot both be right. Either the gold bulls – like in a game of tug-of-war – pull back and prompt the shorters to panic and buy back – or they do nothing, in which case the endless stories about the “end of gold” will see a steady further erosion in prices. At the end of the day it is a question of who has got the biggest guns – the shorts have made their play – let’s see if there is any response from the longs to defend their position.

Un Be Lievable.  Troops and tanks in the street.  AND STILL PEOPLE REFUSE TO THINK ABOUT 9/11.  Just think.  That’s all you have to do.  If you need help call Dr. Kevorkian and get the hell out of the way.