Arizona may become the second state, after Utah, to recognize gold and silver as legal tender authorized for payments of debts and taxes.

The Arizona Senate voted Thursday to approve SB 1439 which allows businesses and the state government to accept payments in gold or silver.

The Legal Tender bill specifies that legal tender in Arizona consists of all of the following:

2. Specie (containing gold or silver) coin issued at any time by the U.S. government.

3. Any other specie that a court of competent jurisdiction rules by a final, unappealable order to be within the scope of state authority to make legal tender.

Currently all debts and taxes in Arizona and the rest of the United States are either paid with Federal Reserve Notes (dollars) which were authorized as legal tender by Congress, or with coins issued by the U.S. Treasury — very few of which have gold or silver in them.

Although Article 1, Section 10 of the United States Constitution states that no state shall coin money; the same section stipulates that no state shall make anything but gold and silver coin a tender in payment of debts. In that regard the sponsors of bill feel that it will simply respect the use of gold and silver as per the Constitution without “coining” its own money.

The law also exempts taxing the exchange of gold and silver into any other currency, and states that gold and silver as legal tender would not be “subject to tax or regulation as property other than money.” 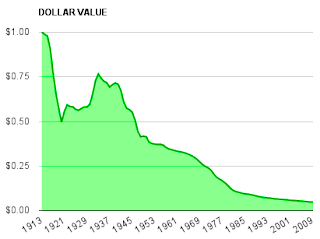 S.B. 1439 is legislation modeled after Utah’s which was the first to pass and be signed into law. Several other states have introduced similar measures motivated by the dollar instability caused by the Federal Reserve’s recent monetary policies.

Gold and silver have historically held their value compared to unstable dollars. The value of the U.S. dollar has plummeted 98% against gold in the last 100 years since the Federal Reserve took over as the U.S. central bank in 1913.

As the Federal Reserve continues debase the currency through persistent quantitative easing, many more states may be looking to cushion themselves against further declines by legalizing competing currencies like gold and silver in the near future.

Arizona’s S.B. 1439 must still pass in the State House and be signed by Governor Jan Brewer before becoming law.