Israel is an excuse, a mandate, a perpetual casus belli, and both an ideological as well as literal beachhead in the Middle East. Created and propped up by the West, in particular the US and United Kingdom, it has served as the medium through which Western foreign policy flows in and out of the Arab, and to a greater extent, the Muslim World.

It is through a carefully cultivated strategy of tension that this perpetual casus belli is maintained. Without the constant perceived fear of Israel’s demise and the “moral imperative” to prevent it, real or imagined, it would be difficult to justify Western involvement in nations that otherwise pose no perceivable threat to America or Europe. A “clash of civilizations” is likewise being created within the West itself to augment this paradigm, but it has yet to “come of age,” and still depends heavily on Israeli-Arab tensions to sustain itself. 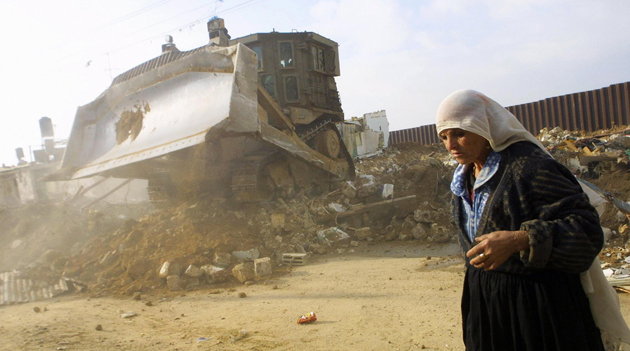 Image: Israel does not bulldoze homes because it thinks it will eventually eliminate its enemies by doing so. To maintain a perpetual strategy of tension to justify perpetual meddling by neo-colonialists in the Middle East, Israel bulldozes homes specifically to create more enemies. To think otherwise, would be to falsely assume Israel’s current leadership is actually invested in the self-preservation of the nation-state. They are not.

It is clearly in the best interests of Western corporate-financiers seeking to remain involved in the Middle East and reassert hegemony over the region, to keep this strategy of tension viable and as heated as possible. The policies of Israel are so ham-handedly provocative, it is surprising that more people do not see the truth behind them – that Israel’s heavy-handed belligerence is a calculated decision to keep the tension ratcheted up as high as possible. For what other reason could a nation-state want to deliberately, slowly, and systematically bulldoze the homes of impoverished men, women, and children? Self-preservation by eliminating it enemies? Or the perpetual creation of new enemies?

It is not just a theory that the West and Israel purposefully cultivate and exploit the hatred incurred by their calculated, blatantly provocative policies.

Like a dam straddling a river, the force of tension against the dam produces energy from which those who constructed it, benefit. The hatred, fear, and violence perpetuated between the Jewish people and their perceived enemies has been a prominent driving force behind Wall Street and London’s century-long campaign of invasion, occupation, subversion, and exploitation across the Muslim World.

A recent example of this was using regional hatred toward Israel to implement the opening phases of the US-engineered “Arab Spring.” Because any regime Israel feigned support for would be instantly poisoned by a political “touch of death,” Israel openly and oafishly feigned support for Egypt’s president, Hosni Mubarak, claiming it had sent weapons and riot control gear to assist his government in suppressing “anti-American/anti-Israeli” protesters. In reality, the protests in Egypt’s streets were planned years in advance, beginning as early as 2008 in New York City by confabs organized by the US State Department.

In essence, the West and Israel played people’s emotional persuasions like a fiddle, and executed one of the most profound geopolitical re-orderings in recent history.

The same ploy would be used against Libyan leader, Muammar Qaddafi. Qaddafi was accused of being “Jewish,” hiring Israeli mercenaries, using Israeli weapons, and of any other conceivable link imaginable to likewise inflict him with the “touch of death” incurred by this strategy of tension. And perhaps the most absurd example of all, were early attempts to use the same tactic against Syria, exemplified best in Hareetz of Israel’s op-ed titled “Israel’s Favorite Arab Dictator of All is Assad.”

None of these ploys would have worked, had Israel and its Western-sponsors not maintained seething hatred against themselves throughout the world.

Now let’s imagine an Israel led by a government genuinely concerned about not only the self-preservation of Israel, but its stability, peace, and prosperity. Would such a nation bulldoze houses leaving destitute families sitting in the rubble before the cameras of the international press? Would such a nation indoctrinate its population to hold an irrational hatred that fuels a destructive conflict that exploits and expends the summation of the Israeli people’s talent, economic activity, time, energy, and attention? 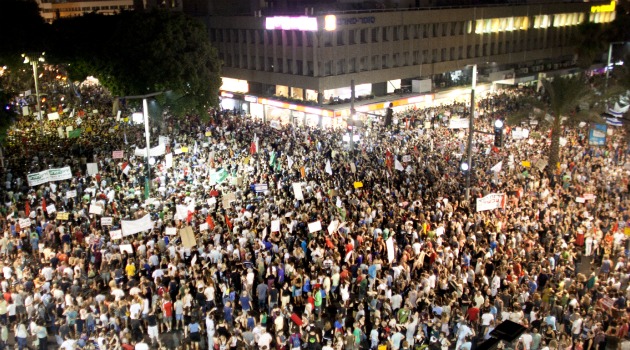 Image: Israel is also suffering protests against economic woes and social injustice – begotten by the misappropriation of Israeli resources both human and financial. The nation could easily redirect its immense military budget into real economic development and progress – if it could oust leaders who seek to maintain Israel as a beachhead for Western hegemony instead of growing it into a self-sustaining nation-state.

The answer is definitively no. A nuclear-armed Israel which faces no serious existential external threats, that turned away from this current Israeli-Arab strategy of tension would lead to region much like Southeast Asia, where profound cultural differences between neighbors have been largely set aside because each nation is too busy developing itself. Israel would benefit, its neighbors would benefit. Extremists on both sides would find themselves with dwindling supporters.

The only losers would be the policy makers from think-tanks like the Brookings Institution, and the corporate-financier interests which fund them. They admit nations like Iran and Syria pose no threat to either Israel’s or America’s national security, and in fact state that provocations must be made to bait such nations into war. Without the Israeli-Arab strategy of tension, without Arabs and Israelis dying every month, year after year, such provocations and the wars they seek to start would become exponentially more difficult to justify or sell to the public – if not entirely impossible.

A future where Israel lives in peace with its neighbors is possible. The answer is not waging war against its neighbors who neither desire nor will benefit from conflict with a nuclear-armed, Western-backed militant state, but by recognizing the current Israeli government itself as the single most pressing existential threat Israel and its people face. By removing and replacing them with people genuinely invested in “Israel the nation-state,” instead of “Israel the beachhead,” a true path to peace and prosperity can be found and embarked upon.

A society of sheep must in time beget a government of wolves.